Frankfurt-based refugee advocates medico international have received a copy of a top secret analysis by German Chancellor Merkel’s government to incarcerate thousands of “problematic” refugees offshore to a detention camp on the isolated Heligoland Islands in the North Sea.

The total land area of Heligoland is just 1 km², the weather is often unfriendly and the surrounding waters of the North Sea; treacherous.

Speaking for medico, Thomas Gebauer said that those sent into detention would likely be subjected to inhumane conditions, with 300 to be initially interned at the island’s Youth Hostel. Further capacity, after evacuation of the island’s civilian population, is projected to exceed 5000 internees with Serco providing “turn-key” camp management via 200 to 1000 personnel, housed partly around the harbours on the main island Lunn, with the remainder on the smaller, wind-swept Dune which has the local airstrip.

British security company Serco , with global experience in managing similar facilities, has reportedly bid €164.23 per internee per day as a detention cost; provided that the land were leased at €1 for 99 years; that it would operate under English law and that Serco be allowed to alter and to freshly construct buildings as necessary to reach Camp Forseti‘s target capacity of 5000. The Frisian islands are not unfamiliar with British occupation; with the British Empire only retreating from them in the middle of the 19th Century. 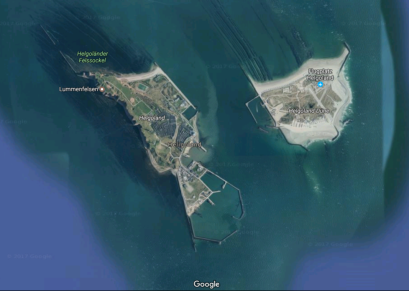 A phone poll of some of the islands’ 2000 or so current residents was almost unanimous in describing the plan as absurd. The compensation for displacement, amounting to €18.29 per day was said to be an insult. One resident, who wishes to remain anonymous said: “Just because we’re Frisian, doesn’t mean that we’re all stupid!”

Mr Gebauer described the plan as a knee-jerk reaction to the acts of a few thousand lone-wolf assaults over the past 15 months; with Merkel desperately grasping for a few percentage points in the polls later this year. “This Alcatraz plays to the thin edge of the wedge of Islamophobic racism rampant in nationalist Germany” said Gebauer. “Germany has to adjust to these new Germans; not put them in a concentration camp on a desolate island.”

The German government’s foreign office, the Auswärtiges Amt, has directed enquiries to the Bundesamt für Migration und Flüchtlinge (Federal Office for Migration and Refugees, BAMF). But the latter would not make a clear statement on the seriousness of the analysis. Mr Gebauer voiced his frustrations: “They’re so accustomed to their gobbledegook being accepted, that they can no longer compose a clear response.”