Anarcho-Capitalists calling themselves “libertarian” this week celebrate 800 years since the signing of the Magna Carta by a weakling monarch under duress on a soggy mound called Runnymede, in the middle of an English swamp. It was probably raining. And the ale was most likely; warm. 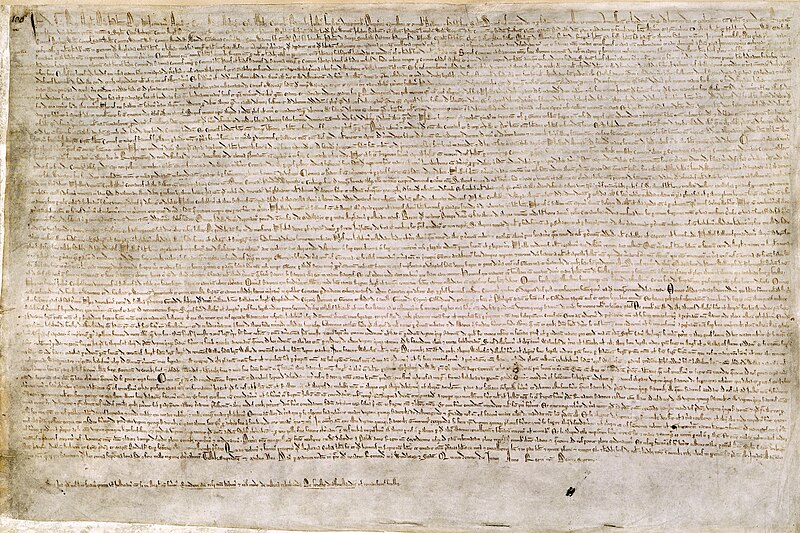 King John had been defending what was right by God and King, inspired and exercising his divine right to rule. His authority was challenged by a few landowners who’d never run a country at all; simply because they felt poorly done by because they had to pay measly taxes to finance a war against an innocent religion. The challengers further questioned the ability of the King to rule on what is right and what is wrong; for his nominated authorities to punish what they saw as wrong, as they saw fit. It’d taken 3 centuries and several foreign invasions to whittle away the folly of equal penalty for a predetermined transgression, regardless of one’s station in society; propagated by the bible-bashing King Ælfred of Wessex in his Domboc (ca. 893).

Indeed, the challengers also saw fit to make even the King accountable under a fantasy of “rule of law”; as if God’s agent in the land wasn’t already accountable to God.

It set a precedent that authorities be accountable to those who weren’t good enough to be authorities themselves. It wasn’t long before some of those wrongs were righted and authorities have proven themselves, time and time again, to be competent at managing the world around us. Exemplary in environmental issues since Yellowstone Park was established in 1872. And since the United Nations was established 70 years ago; with a mission to alleviate human suffering.

The work of luminaries such as Christiana Figueres, Christine Lagarde, Ban Ki-moon, Rajendra Pachauri, Barack Obama, Angela Merkel, Maurice Strong and Prince Charles and their predecessors such as Kofi Annan; who wouldn’t have risen to their high position if they weren’t good at what they do; that has brought peace to the Middle East, stable democratic government to South America and ended hunger and disease in Africa. It is only people like that who have the intellectual authority to make the decisions necessary to pull us back from the dangerous tipping points of catastrophic climate change. They make the right decisions for us, simply because they consult with the best and know best. They are trustworthy authorities.

If they weren’t trustworthy, why would 97% of all nations commit to financial and other support of bodies such as the United Nations? People have already placed their trust in their respective nation’s government to make the right decisions; acknowledging the authority of government in such matters.

It is ultimately their government(s) to which people come for assistance when they can use it. Such implicit trust can only come from governments having demonstrated competence.

The Magna Carta should be left to rot in historic archives. Perhaps used as a warning for the damage that it can cause to the rule by authoritative government; not something worthy of praise.

One thought on “Magna Carta: 800 Years of Government Shackled by Crypto-Anarcho-Capitalists”