The esteemed head of the much-lauded PIK – Potsdam Institute for Climate Impact Research, Professor Hans Joachim (“Call me John”) Schellnhuber is very pleased with the mid-summer installation of the Institute’s new heating system. “Warm Hans” Schellnhuber is perhaps best known for his inspirational contribution as advisor to Vatican’s Pontifical Academy of Sciences; as vocal, trusted advisor to Germany’s Chancelloress, Angela Merkel and as a long-term, full member of the Club of Rome (aka The Latter Day Church of Thomas Malthus)

A Bank of Heater Elements

The European Union financed 3 of the 4.4 million euros that the heating system cost. IBM, diversifying into horizontal markets, engineered and supplied the system especially for PIK. Leveraging its expertise in computing technology, IBM combined a total of 5088 intelligent heating elements that individually convert electrical power into heat to make a boiler large enough to keep his 200 workers at the institute snug and warm in July; and focused on the imminent problems of a warmer planet. 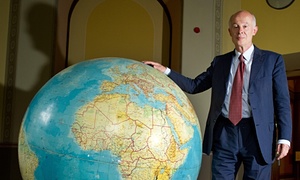 Karsten Kramer, head of IT at PIK with more than 20 years of experience in high-performance computing was extremely pleased with the new system pointing out that waste computing cycles from the heating system could be used to create convincing animations of whatever the researchers at the institute wanted to prove to people who had no understanding of the science. Not the Kramer from Seinfeld

“To substitute the computing power of the newly installed device, each person on Earth would have to do almost 30,000 calculations per second – this illustrates that we need this cutting-edge technology,” says Kramer. “Conversely, without the ideas of our scientists even the fastest computer would be useless.”

Indeed, as Erasmus may have put it; being a genius does not prevent one from being foolish.